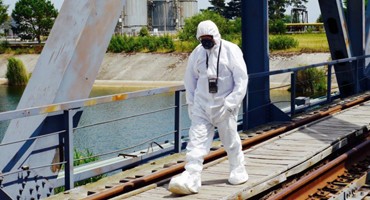 Іn a gym the audience-members find themselves together with six performers in a fictional catastrophe-setting. In this setting they re-enact with live-cameras, choreographies, language, sound, and pyrotechnics various catastrophes in recent history. The 1986 nuclear fallout of Chernobyl acts a mere starting point for a ‘permanent state of catastrophe’ in which we as a whole generation have since been living in.

The performance is based on interviews that were conducted in Austria and in the Ukraine. In these interviews with various people from various backgrounds the start-off question was always the same: “What is your connection to Chernobyl?” This question is only the trigger for a collective memory that spans across Europe, uniting East and West — for this one moment when the explosions start and our lives become something different altogether.

This performance has been made possible with the support of the Austrian Cultural Forum Kyiv and the Austrian Ministry of Culture.

Franz von Strolchen is an individual artist as well as a collective working in theatre and performance from the base in Graz, Austria and tour to audiences all over the place…

Franz von Strolchen deals in his works with the boundaries between reality and fiction. He is always interested in creating new ways of communication, perception, and in establishing new communities with the means of a performative setting.

In the projects that he has created since 2010 he has turned a whole corporate building into the brain of a criminal, discussed strange utopian ideas of living together in traditional pubs, turned a night-club into a fictional state, or built an outsider-sculpture on a theater stage, so the audience could install it then in the public space. His projects always try to blur the line of documentary and fiction / authentic and falsified stories.

Consequently, the material is generated by interviews, long-time research, as well as by improvisation and written texts by the creator.

PREVIOUS PROJECTS INCLUDE (AMONGST OTHERS)