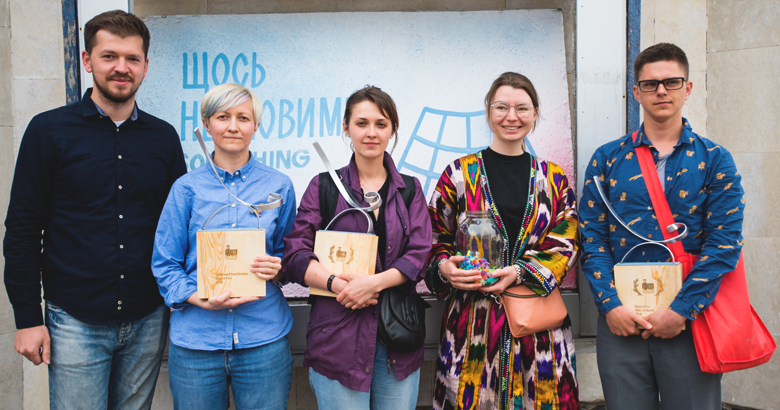 May 13th marked the end of the “«86»: Something in the Air” festival in Slavutych. The Jury of the “Palm of the North” and MyStreetFilmsUkraine competitions announced the winners at the closing ceremony.

The “Palm of the North” Grand Prix and the $1,000 prize was awarded to Alexander Zubovlenko’s “Happy Pills”, the Best Ukrainian Film Award was received by Zhanna Ozirna’s “Bond.” “Happy Pills’ also received the Viewers’ Choice Award. A total of 12 films participated in the competition, with 5 Ukrainian and 7 foreign works by directors representing the countries that originally contributed to the construction of Slavutych.

The closing ceremony featured a performance of Meredith Monk’s “Other Worlds Revealed” by the festival team.

Over the five days between May 9th and 13th, the festival hosted over 3,000 visitors. 17 feature films and 22 shorts were screened at the three locations. The participants of The Urban Residence presented 8 projects and installations, the results of their monthly stay in Slavutych. As part of the architectural workshop. Five teams constructed wooden objects for the festival’s camping spot: an observation tower, an imaginary bridge and a wave-like food-court sunshade. Over 30 children visited the Urban School for Kids. 25 artists were featured in the musical programme. Mariia Kuvshynova delivered her lecture “Peoples’ Friendship Checkpoint”. The 5th «86» IFFU’s official trailer was directed by Nadiia Parfan, with music by Marharyta Kulichova.

The dates for the 6th International Festival of Film and Urbanism «86» will be announced shortly.