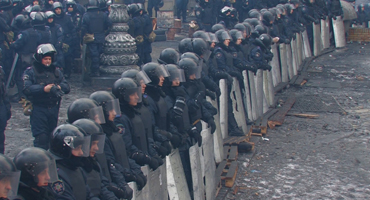 “Our society is not ready for democracy,” one of the Internal Troops of Ukraine servicemen says on the Maidan in 2014. For the first time, those standing on the other side of the barricades are speaking up on the film screen. The citizens whose profession is to protect the democratic rule in the state, and who were unable to talk openly due to their uniforms. In this chronicle of the Kyiv confrontation and interviews, the director tries to find out how the people under uniforms are dealing with their right to choose, upon which democracy is based, while the war in eastern Ukraine unfolds.

Andriy Bezliudny was born in 1989 in Sumy. In 2008 he entered the Karpenko-Kary University where he filmed fiction and documentaries, as well as music videos. Later he was working in advertising. In summer 2014 he was an editor and fixer, working with the foreign journalists in eastern Ukraine; he was also filming there. Now he works as a director and freelance videographer in Kyiv.

Originally from the Donbass, Vadimsky for years was a small businessman. In 2011 he enrolled in art school in Paris to study Fine Arts and Illustration. In the spring of 2014 he went back to his hometown of Donetsk. He lost his business and started to work as a journalist. Form 2014-15 he worked for various western media.