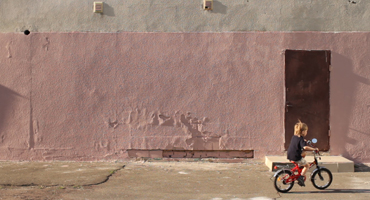 The typical living blocks – Troyeshchyna in Kyiv. The neighborhood’s biggest pulsing arteries, Tsvetayeva and Mayakovsky Streets, were constructed almost simultaneously several years before the Soviet Union collapse. The combination of archival footage and today’s shootings brings up the almost 100 years of history – from right after the revolution, in 1918, when Mayakovsky starts to make films, until the modern day, when a person is capable of almost anything, even looking over the horizon. Or in the intersection on the two streets there is a story of the masses whose poet Mayakovsky was; the masses who ousted Tsvetayeva from their concrete towers. In any case, it a magic of the closest things that the pedestrians wouldn’t pay attention to.

Polina Moshenska is an independent Ukrainian film director and visual artist. She holds a degree in Cultural Studies from Kyiv-Mohyla Academy. From 2011-12 she was an assistant director during the production of Life Span of the Object in Frame by Oleksandr Balahura. Her first short film The Bridge was selected to the international festivals all over the world.