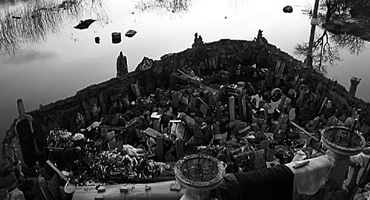 Almost in the downtown of Lutsk, on the bank of Styr river, the groups of tourists approach the fanciful walls around the yard of an amazing building. Behind these walls, in the middle of a great number of sculptures, a small universe of a reclusive Pygmalion is hidden. Paying no interest to the tour guides voices, Mykola Holovan carefully keeps carving the stone to create new statues; as if an Ancient Greek character, he exchanges his solitude for the most important prize, the harmony. During the silent journey to this world, the very art get animated, it is not only a finished piece, but also an everlasting process. Either in sculpture or in film.

Nataliya Krasylnykova has received her MA in Journalism from Taras Shevchenko National University in 2008. In 2013 she received the diploma in Documentary Directing from Karpenko-Kary National University and in 2014 she graduated from Wajda School in Warsaw as a documentarian. She has received the Gaude Polonia scholarship two times (in 2013 and 2014); it is given by the Polish government to creative youth.