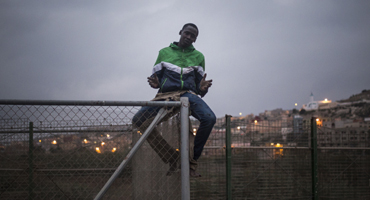 “The Great Wall has been completed at its most northerly point”.

So begins Kafka’s The Building of the Great Wall of China, but, at Europe’s militarized southern frontier, begins the film. From Europe’s edges, “The Great Wall” moves across fortified landscapes, pausing with those whose lives are framed by exclusion. Moving inward toward the seat of power, the film holds the European project up to a dazzling cinematic light, refracted through Kafka’s mysterious text.

The film is presented by the director Tadhg O’Sullivan.

Tadhg O’Sullivan is a filmmaker and sound artist living in Carlow, Ireland. Working within the documentary and experimental film traditions his work often explores the relationships between individuals and societal structures of power. His first feature film “Yximalloo” (co-directed with Feargal Ward) has shown at numerous international film festivals, winning the Prix Premiere at FiD Marseille in 2014. He received the Arts Council of Ireland’s Film Bursary in 2015.