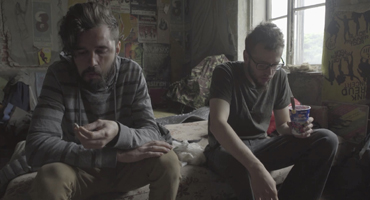 How far can you go on the way to your dream? Zhenia and Maks stopped going to the office and took up music seriously. Their band is called Reve ta Stohne. The guys do growl singing and dream of becoming real rock stars. However, for a start they need a music video and a studio album. And most of all they need money to pay for them. In search of income, Reve ta Stohne travels to the West.

The screening will be followed by Reve ta Stohne performance.

Nadia Parfan was born in Ivano-Frankivsk. She graduated from the Kyiv-Mohyla Academy and the Central European University. She is a curator and co-founder of “86” Festival of Film and Urbanism. She is also a producer of the independent documentary Love Me (2014) by Jonathon Narducci. In 2014-15, she has been studying documentary directing at the Andrzej Wajda School.