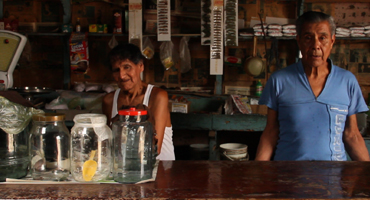 JUST ABOUT TO TAKE OFF

San Agustín had over 100 years of history. Surrounded by crops, the inhabitants lived with their backs to the city. Nevertheless, they always knew they would be evicted. It finally happened in 2013, with the expansion of Lima’s airport. Before the inevitable, the inhabitants resist through their memory and dignity, while the airplanes won’t stop taking off.

Lorena Best Urday was born in Lima. She is a social communication specialist, with a master’s degree in Social Memory from the Federal University in Rio de Janeiro. She has worked in Peru doing intercultural and artistic education with audiovisual media for fifteen years.

Robinson Díaz Sifuentes was born in Lima. He studied Broadcasting at the Universidad Católica del Perú. He is also a partner of Bergman Was Right Films. Robinson was an assistant director for the short documentary La Calma that represented Peru, competing in its category for a Golden Bear at the 61st edition of the Berlinale.