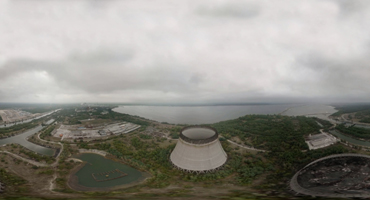 An interactive documentary in 360-degree format from the heart of the Chernobyl Nuclear Power Plant.

The project is created by using innovative technologies, which give the viewer a way to dive as deep as possible in what is happening in the 30 km Exclusion Zone. The plot is built on multiple paths through the stories that can be watched selectively or sequentially. But in order to see the culmination and to get inside the Chernobyl unique objects, which are usually accessible only to selected employees of the zone, you will have to pass all the levels of the project.

“The aim of the project is to attract attention to the consequences of human activity on the planet Earth using an amazing world of Virtual Reality,” project creator and producer Kirill Pokutnyy says.

Kirill Pokutnyy came up with the idea of creating this virtual reality documentary about Chernobyl. He grew up in a family that was directly affected by the Chernobyl disaster. His father had been working at the site of the accident for more than 10 years.