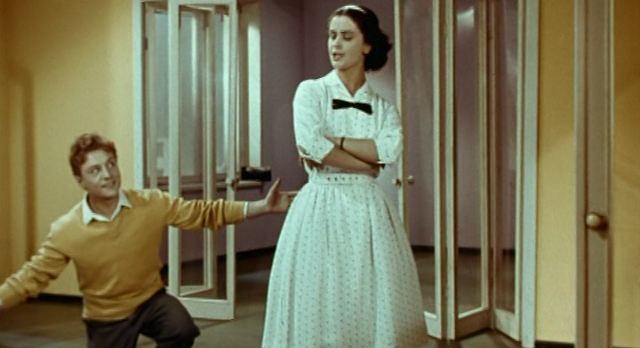 A fictional musical comedy, screen adaptation of the Moscow – Cheryomushki, an operetta by Dmitry Shostakovich dealing with the eternal housing issue. Lida Baburova, a young architect, was given an apartment in the new Moscow district; she took her father to look up her new home. Right in front of their eyes one of the apartment’s walls gets ruined. Turns out the head of the building trust, the inhabitant of the building, has decided to expand the size of his apartment, driven by the whim of his young wife…

The film was a hit in 1963 in Soviet Union, 28.8 million viewers had seen it. Cast: Olga Zabotkina, Vladimir Vasilyev, Vasiliy Merkuryev, Yevgeny Leonov.

Herbert Rappaport (1908–1983), known in the Soviet Union as Gerbert Moritsevich Rappaport, was an Austrian-Soviet screenwriter and film director. From 1927 to 1929 he studied Law at University of Vienna. Rappaport worked as screenwriter, music editor, and assistant director in Austria, Germany, and the United States from 1928 onward. In 1936 he was officially invited to the Soviet Union to internationalize the Soviet Cinema which he accepted and spent the following 40 years working as a filmmaker there.