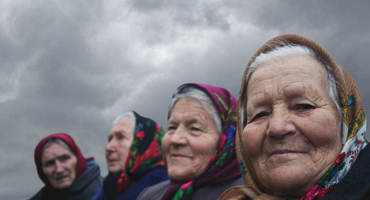 THE BABUSHKAS OF CHERNOBYL

Approximately 100 women defiantly cling to their ancestral homeland in Chernobyl’s radioactive “Exclusion Zone”. While most of their neighbors have long since fled and their husbands have gradually died off, this stubborn sisterhood is hanging on – even, oddly, thriving – while trying to cultivate an existence on toxic earth. Why do they insist on living on farms that the Ukrainian government and radiation scientists have deemed uninhabitable? How do they manage to get by, isolated, in an abandoned landscape guarded by soldiers, and rife with wild animals? How has the radiation affected them these past 29 years?

Anne Bogart has filmed around the world for the PBS travel series Globe Trekker for 12 years. She has produced and directed programming for both French and English-based broadcasters. Bogart has written for W magazine, The New York Times, The Los Angeles Times, Women’s Wear Daily, and ElleDecor magazine.